To our Friends and Fans,

We have sad news.  Our friend and brother in music, Stacy Phillips, a man who was many, many things, including a Grammy award winner, a Bluegrass legend and a founding member of the Afro-Semitic Experience, died, Tuesday, June 5 around 9:30.  He was 74 years old. He experienced a massive heart attack on Sunday and from then on it was just a matter of time.  He was surrounded by his family, his sister and his niece and nephew.  Stacy was his own person and that was reflected in the life he led as a musician.  We traveled the world with him.  We traveled the United States with him.  We shared meals together and bandstands together.  We heard the same jokes from him over and over and we laughed every time.  It is hard to believe he is dead. We would say more about Stacy, but others have already said it better.  There is a great obituary about Stacy in the New Haven Independent.

On Sunday, June 10, we participated in a musical memorial for Stacy at Café 9 in New Haven.  We were joined by so many other musicians, bands, students, and fans who all paid tribute to him.  There’s a great article about that event in the New Haven Independent. 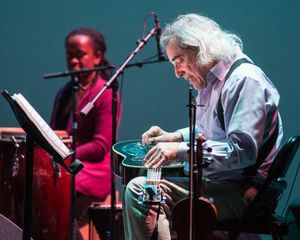